There are 2 types of HIFU namely ultrasound based HIFU (USgHIFU) and magnetic resonance imaging Focused Ultrasound Surgery (MRgFUS). Here I will outline the difference between these two modalities and the benefits USgHIFU for fibroids and adenomyosis.

High intensity focused ultrasound (HIFU) is also known as focused ultrasound surgery, which uses focused sound energy to heat and destroy tissues in the treatment of various medical conditions. It is a non-invasive, organ sparing, thermal ablative procedure. The principle of this treatment is similar to the concept of focusing the sunlight through a magnifying glass to burn a hole in a leaf. Like the focal point of the magnifying glass has the highest intensity, the extracorporeal transducer used in this treatment focuses a high-intensity ultrasonic beam on the targeted tissue, depositing high level of ultrasound energy. This highly concentrated energy will be absorbed by the tissue generating temperatures between 60°C – 80°C to thermally ablate the abnormal cells.

Under a precise imaging guidance, a high intensity acoustic energy pulse termed sonication is converted to heat energy at the focal point resulting in coagulative necrosis and destruction of the targeted tissue. Moreover, HIFU causes pressure waves in the tissues causing the tissue to vibrate leading to mechanical cavitation and stress to the cells, leading to cell death. As the transducer causes the ultrasonic beam to be focused at a focal point, there will be minimal injury to the intervening tissues.

What diseases benefits from HIFU?

Both techniques offer different advantages and disadvantages respectively as shown in Table 1. 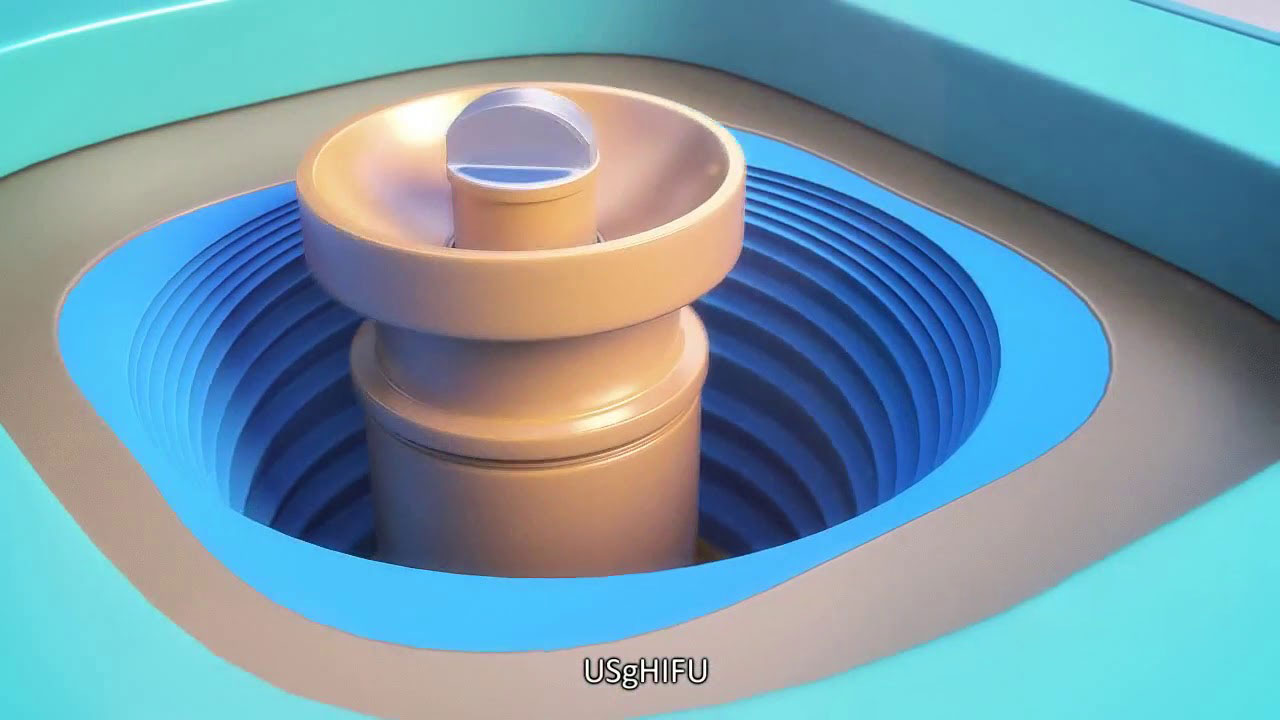 Since HIFU is a non-invasive treatment, patients are scar free and able to recover within a short duration. The duration for each USgHIFU treatment session ranges from 1 to 4 hours. Most of the treatment can be completed in one session. However, patients with multiple or large diameter fibroids may need to undergo a few sessions.

During the procedure, patients do not require general anaesthesia, they remain conscious and able to communicate with others, do some readings or watch videos. During the treatment, patients will only have minimal blood loss where blood transfusion is not required. They will only experience minor discomforts. Most of them can be discharged once the sedation wears off on the day of treatment if they do not encounter any complications.

Women with fertility desire benefit the most from HIFU treatment because they do not need to wait for their uterus to heal completely before trying to conceive. They can resume having sexual intercourse after completion of the next menstrual cycle.

How is HIFU performed?

The patient with be given light sedation during the procedure and will need to lie prone during the entire surgery. After the USgHIFU, the blood flow into the treated tissue is checked using contrast enhanced ultrasound (eg Sonovue). Postoperatively she need to be observed for several hours and can be discharged on the same day.

Efficacy of USgHIFU in fibroids

Non-perfused volume ratio is the ratio of non-perfused volume of all treated lesions to the total volume of the lesions. This is evaluated by MRI performed after the USgHIFU surgery. A higher NPV ratio indicates lack of blood perfusion in the lesions, otherwise indicating a successful treatment outcome with lower risk of re-intervention. USgHIFU was introduced in the gynaecological field in 1999. In a retrospective study conducted in China using USgHIFU, 98.4% (7319 of 7439 participants) of the fibroids were successfully ablated with mean NPV ratio of 83.1 + 15.6%(1). The NPV ratio was >70% in >80% of the treated fibroids while the re-intervention rate was < 10%. The positive outcome of this treatment was also shown in M.Zou et al study(2). The average rates of volume reduction were 45.2 + 21.3% and 59 + 25.6% at 3 and 6 months post-USgHIFU treatment respectively. No adverse effects or complications were found during and after the treatment. Another study also reported the mean NPV ratio of 84.15 + 10.4% post-treatment(3).

Efficacy of USgHIFU in adenomyosis

As HIFU can precisely ablate the lesion, it can help to preserve the surrounding uterine musculature, collagenous fiber and elasticity(2). Without injuring the healthy tissues and less scar formation on the uterus wall, the expansion of the uterus to accommodate pregnancy and the contractility during labor can be retained(2,8-10). Patient can also try to conceive much sooner after HIFU treatment compared to myomectomy. Studies have shown successful pregnancy within months after HIFU treatment for fibroids either by natural pregnancy or assisted reproductive treatment(8,11,12). Zhou et al also reported 54 of 68 patients with adenomyosis conceived at 10-month post-HIFU and 21 of them delivered without complication(8).

The most common reported adverse effects are pain at the treated region, mild sacrococcygeal pain and abnormal vaginal discharge. All these can be explained by the inflammation caused by the thermal effect of HIFU. They will usually subside within 3 days. The abnormal vaginal discharge is normally seen among patients with submucosal fibroids and adenomyosis where the endometrium is damaged during the HIFU treatment. However, this symptom will subside after undergoing hysteroscopy to remove the necrotic tissues.

The other minor adverse effects like lower limb paraesthesia, nausea and vomiting, skin blisters, fever and haematuria rarely happen and can be explained due to the use of the sedative medication, inflammation or urethral catheter injury. Some patients with retroverted uterus may also encounter urinary retention which can be treated by indwelling urinary catheters for 3 days. In Liu et al’s study, 38 out of the total 27053 patients with benign uterine disease were treated with USgHIFU experienced 2nd or 3rd degree skin burns (0.1405%)(13). All these 38 patients had prior surgical abdominal scars. The denervated scar tissues are fibrotic, less sensation and vascular compared to the normal healthy tissue causes difficulty for the ultrasound beam to penetrate. Instead, the ultrasound energy will be readily absorbed by the scar tissue resulting in thermal damage to the skin. To prevent skin burns, gynaecologists should regularly check on the skin and move the transducer down in the water tank. On the other hand, leg pain and numbness post-HIFU are due to sacral nerve irritation. These are temporary and will subside with NSAIDs within 2 weeks.

Bowel injury is a rare but devastating complication. Liu et al reported 4 patients (0.01485%) encountered bowel injury and perforation 4-12 days post-HIFU but recovered fully after surgical repair(13). One of the reasons could be the bowel is not completely pushed away by the degassed water balloon from the acoustic pathway causing direct thermal injury on the bowel. Another reason can be due to the presence of adenomyosis and endometriosis which have a high risk of pelvic adhesion. If the bowel adheres to the uterus or abdominal wall, the risk of bowel injury will significantly increase.

Overall, the rate of major adverse effects reported was low. We can conclude that USgHIFU is safe in treating patients with benign uterine diseases.

Who is suitable to undergo HIFU?

In order to optimize the outcome of USgHIFU, the body fat of the abdomen wall should be <4cm and the distance between the abdominal skin to the lesion must be <13cm. The size of the uterine fibroids should be 1cm – 12cm. Lesions with lesser hyperintense foci on the T2-weighted MRI scan have lower success rate. A hyperintense lesion contain higher perfusion which allows heat to dissipate more quickly resulting in lower NPV ratio. For safety, lesions which are close to the sacral bone surface should not be offered HIFU.

So, patients with thinner abdominal wall, poor blood supply to the lesions, larger lesion volume, less hyperintense foci on the T2-weighted MRI scan and lesions located on the anterior wall of the uterus is the most ideal candidate for HIFU treatment.

Which patients should be excluded from HIFU treatment?

Laparoscopic Surgery In Gynaecology And Common Diseases In Women.