Generally, there are two ways of performing gynaecological surgery: laparotomy and laparoscopy. Laparotomy is the conventional open surgery, where an incision of several inches long is required. Two of the most common incisions for laparotomy in gynaecology are the lower midline incision, a vertical incision below the umbilicus; and the Pfannenstiel incision, a transverse incision just above the pubis.

Laparoscopy, on the other hand, is performed through several small “keyhole” incisions in the abdomen, where instruments like a laparoscope (a thin telescope-like instrument),scissors and graspers are inserted to perform the surgery.

When is laparoscopy needed?

Laparoscopy is performed either for diagnostic or operative purposes. Diagnostic laparoscopy is a procedure that allows the doctor to directly view the pelvic organs to investigate pelvic pain, infertility, suspected ectopic pregnancy, endometriosis and other diseases. It is usually recommended when the cause or symptom of a disease cannot be confirmed via other diagnostic tests, such as ordinary enquiring about the symptoms, physical examination, ultrasound or radiological (X-ray) examinations. Operative laparoscopy allows a doctor to perform gynaecological surgeries in a minimally invasive manner.

How is Laparoscopic Surgery Performed?

Laparoscopic surgery is performed under general anaesthesia. Prior to the laparoscopy, a tube (catheter) may be inserted into the bladder to drain urine during the surgery. A 10 mm incision is made in the umbilicus and a Veress needle is inserted into the abdomen. The Veress needle is then connected to a carbon dioxide (CO2) ) insufflation tubing. Gas is passed into the abdominal cavity to distend the abdomen, so as to allow the doctor to see the pelvic organs and to perform the surgery easily. A 10 mm trocar (g) is placed in the umbilicus, followed by several 5 mm trocars, which are placed at the lower abdomen.

A laparoscope attached to a video camera, is passed through the 10 mm port. Video images captured by the video camera are immediately displayed on a video monitor. A powerful light source is channeled into the abdominal cavity for the purpose of illumination. Instruments like laparoscopic scissors and graspers are inserted through the other 5mm ports to perform the surgery. At the end of the surgery, all the instruments are removed and the CO2 gas is released. The incisions are either sutured or taped. In some patients, a drainage tube is left in the pelvis to drain out any fluid that may accumulate after the surgery.

Figure 15.4 series of photos showing how laparoscopic surgery is performed. (a) A 10mm incision made in the umbilicus (b) Veress needle placed through this incision (c) Trocar inserted into this umbilical incision and laparoscope placed in the trocar (d) 3 other 5mm trocars are inserted (e) this is how the wounds look after the surgery 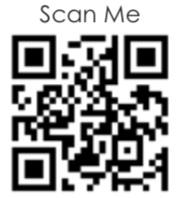 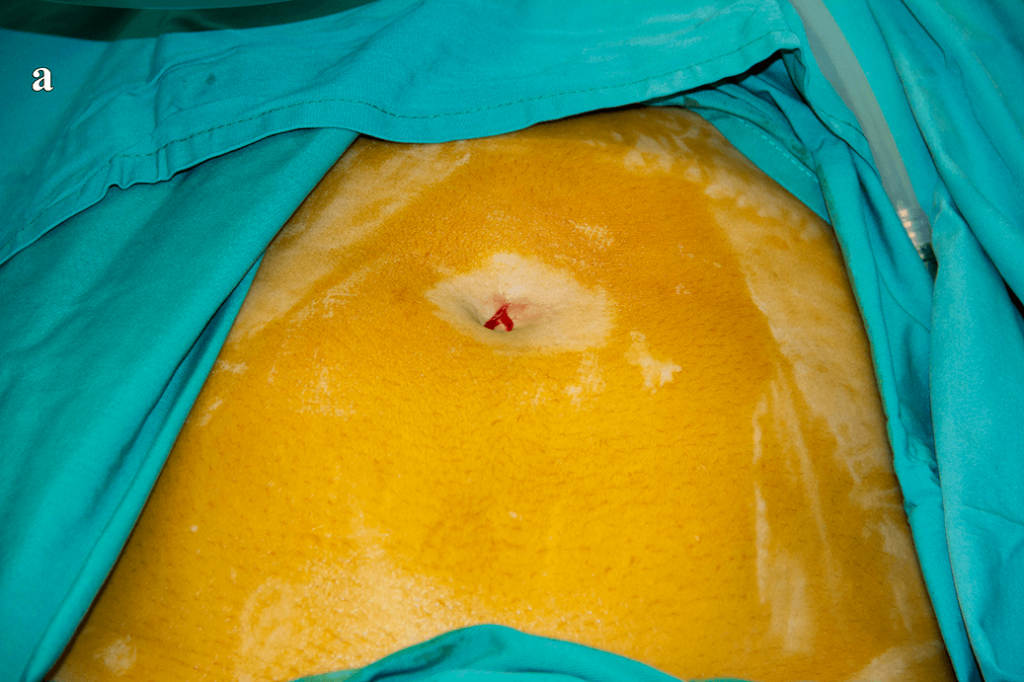 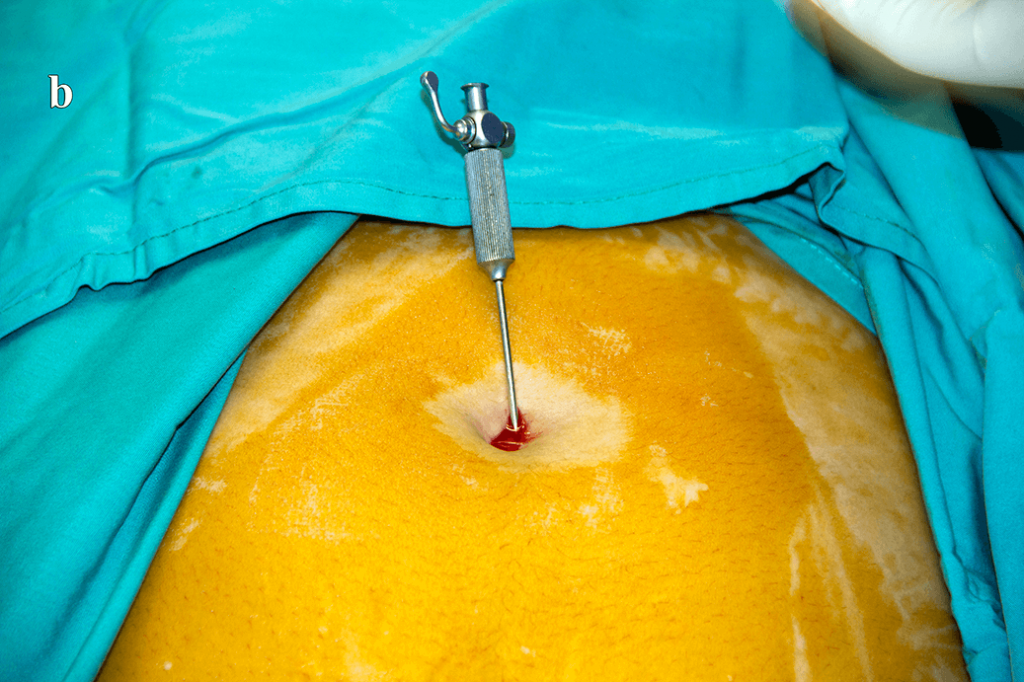 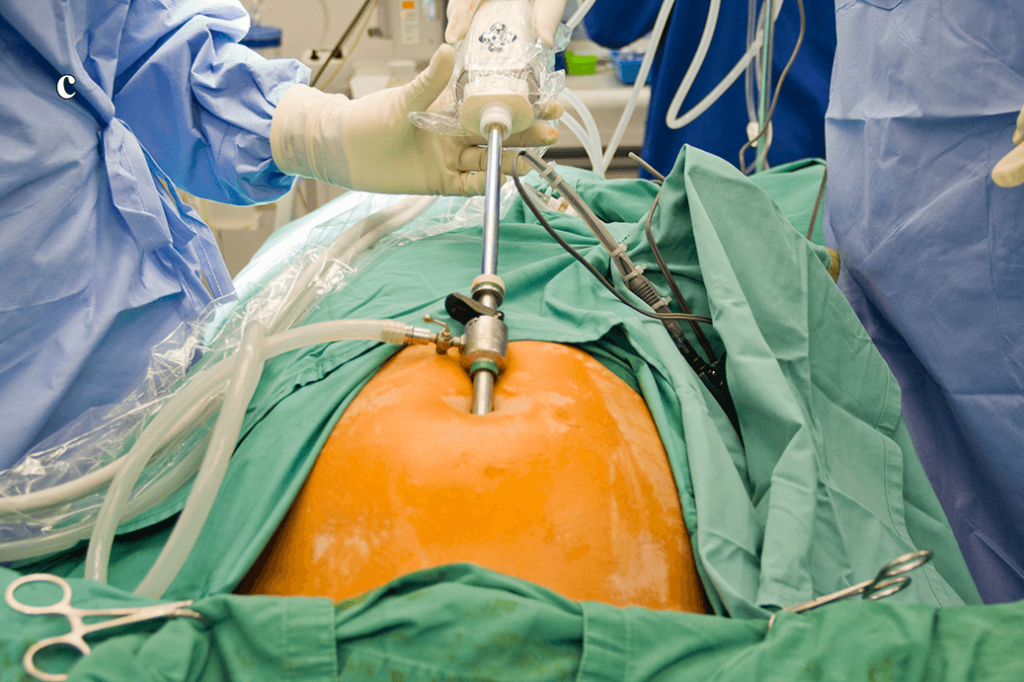 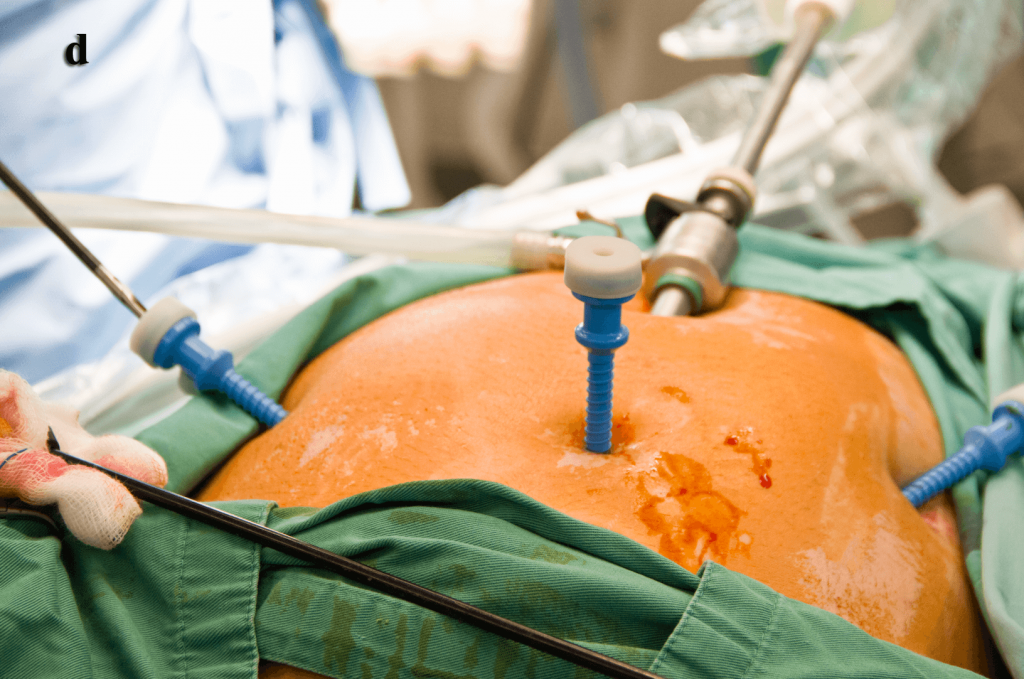 1)  Less postoperative pain. In laparotomy, a large incision is usually made and layers of the abdomen are separated in order to access the abdominal and pelvic organs. These layers are then sutured one by one on closure of the abdomen. In laparoscopic surgery, however, only small punctures (keyholes) are made. Thus, postoperative pain as a result of wound healing is far less in laparoscopy compared to laparotomy.

5)  Reduced chance of scar formation in the abdomen. In laparoscopy only fine instruments are used to perform the surgery whereas in laparotomy, the surgeon places his hands into the abdomen and pelvis to perform the surgery. Therefore, laparotomy has a higher likelihood of developing adhesions (scar tissue in the abdomen) than laparoscopy. This is especially important for patients who want to conceive because adhesions in the area of fallopian tubes and ovaries may lead to difficulty in conceiving.

6)  Reduced infection rate because the small incisions do not expose the internal organs to air in the operating room.

9) Smaller scars on the skin.

10) Video magnification offers the surgeon a better view of the diseased organs and its surrounding vessels and nerves.

2) Discomfort and tiredness for up to five days.

3) Increased urge to urinate because the CO2 insufflated during the surgery can apply pressure on the bladder.

5) Pain at the incision sites. Medication is usually prescribed to alleviate this.

6) Period-like pain and a few days of vaginal bleeding or discharge.

7) Shoulder pain for a few days because the CO2 insufflated can irritate the diaphragm, which shares the same nerves) as the shoulder( predominantly the phrenic nerve).

Gynaecological surgeries that can be performed by Laparoscopy Tubal ligation

7) Prolapse of the uterus

8) Removal of the ovarian cysts

9) Cancer of the endometrium

10) Cancer of the cervix

Conditions that may be difficult to perform Laparoscopic Surgery

Patients with the following conditions may not be suitable to undergo laparoscopic surgery:

1) History of bleeding. Laparoscopic surgery may not be suitable for patients who suffer from bleeding disorders, as it may increase their risk of profuse bleeding during the surgery.

2) History of laparotomy. Patients who previously had a laparotomy may not be suitable for laparoscopic surgery because laparotomy can lead to scarring which may cause the pelvic and abdominal organs to adhere to the abdominal wall. Separation of these scar tissues may lead to complications. However, an experienced surgeon can still perform laparoscopic surgery on patients with such condition.

3) Pregnancy. Due to the enlarged uterus, inadvertent uterine injuries from trocar placement may occur. The other
possible problem is that, due to CO2 insufflation, acid-base imbalance from CO2 absorption may lead to hypercarbia (excessive carbon dioxide in the bloodstream), which may compromise the foetus. However, with adequate precautions, laparoscopic surgery can still be performed on pregnant women especially during the early stages of pregnancy.

4) Large uterus Uterus may be enlarged because of fibroids or adenomyosis. When the uterus is large, there may be less space for the surgeon to perform a laparoscopic surgery. It may be difficult for a surgeon to visualise all the structures via a laparoscope.

All in all, a doctor’s own skills and experience are crucial in determining whether he can perform the surgery laparoscopically. Doctors, who have only received basic laparoscopy training, could not perform more advanced and complicated laparoscopic surgeries.

Fact 15.1 Why many gynaecologist do not perform laparoscopic surgery?

Traditionally, all gynaecologist are taught to perform surgery by laparotomy. During a laparotomy, the surgeon looks directly at the area he is operating on and uses his hands to perform the surgery. It is easy for a gynaecologist to learn the art of performing surgery by laparotomy. However, laparoscopic surgery is performed by looking at a monitor. The images transmitted on the monitor are in 2 dimension (3D cameras are now available). Surgery is also performed using fine instruments passed through a trocar. As such, he has to learn to coordinate his hands to what he sees on the monitor (hand-eye coordination). It takes a longer time to learn laparoscopic surgery and the learning curve is steeper than in laparotomy. Due to time constrain, many gynaecologists are not willing to master the skills required to perform good laparoscopic surgery because it is time consuming.

1) In laparoscopic surgery, 1 to 4 small incisions are made to perform the surgery.

2) Many gynaecological surgeries can be performed by laparoscopy.

3) There are many advantages of laparoscopic surgery compared to surgery by laparotomy.